So, as you can tell, I did not write any posts while I was away.  I had no time for that type of reality and on such a small device.  I will attempt to summarize my adventure in this post.  So much of what I experienced was serendipitous and as a result of meeting and spending time with strangers.  However, it felt as if I’d known these strangers forever.  I would never have had these experiences if I had not taken this trip on my own.  This just had to be a solo journey.

First, I picked two out of four areas from which my family hailed, as I wanted this to be a fairly relaxed exploration so that I could absorb the local atmosphere versus running around and ‘seeing’ things.  I often absorb the non-physical about places.

So I started out in Stockholm and planned a couple of days to get my travel legs (to get rid of jet lag).  It turned out to be a good decision because I also got some food poisoning(?) at Heathrow(?)…so a less than stellar travel day, but I recovered quickly.  Here’s a view from behind my hotel on Sodermalm in Stockholm:

Lilacs were in bloom during my entire trip, everywhere, and I love lilacs.  I made some silly mistakes with my camera periodically, but most pictures were salvageable and a few were excellent.  I’m learning the basics still.

Next I flew to Umeä in Vasterbotten Ian where the female line of my family lived for a few generations in the 18th and 19th centuries.  For the time of year I was traveling, I loved Umeä and it’s inhabitants.  Essentially, it never got dark while I was there, except for the only rainy day of the entire trip.  And it also had fast and easy free public wifi!  And bicycles everywhere! 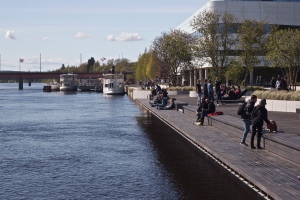 They make great use of their river front on the Ume.  Umeä is a couple of miles from the Bothnian Sea.  And then I took a few pictures like this:

I took these for B.  Every Saturday night, the old American cars surfaced and paraded around the towns I visited.  They appeared randomly so I never got a really good picture, as they only seemed to appear after I put my camera away…

But here was the purpose of my journey to Umeä:

Bäggböle Village, or a piece there of, and

Bäggböle Arboretum with the rapids where the sawmill was located.  My ancestors went to this area to work as sawmill workers and/or as lumberjacks.  I must say, for those in the know regarding the scandalous Bäggböleri, my people were there at the very start and had left the area before the big guys came in to take advantage.

On the way back my new friend suggested we stop at this 12th C. church, which my ancestors would have attended, in Backen: 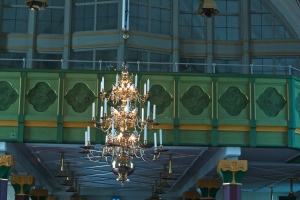 I took the overnight train back to Stockholm, 21:30-6:30.  I love having my own compartment and bed on a train.  I slept great and awoke to Stockholm.  Within minutes I was on the train to Nässjö, Småland and then a bus to Eksjö.  Here I met more wonderful people.  I think I will discuss serendipity in another post.  In Småland, I visited Ingatorp church, which is the parish of the male side of the family for generations, and their hamlets, farms, houses (went in three). And, oddly enough, had a Umeän meal of reindeer, wild mushrooms and vasterbotten cheese in a typical Småland farmhouse overlooking meadows of wildflowers down to a still lake in Ingatorp.

A couple of the our homes: 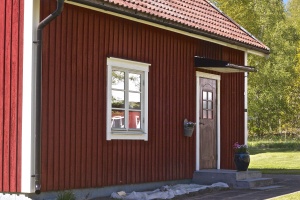 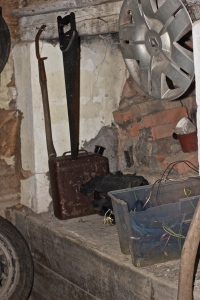 This is the original kitchen fireplace!  Love it.  And the Ingatorp church was beautiful:

There was much decorative painting on the interior of this church.  Wouldn’t this make a great quilt?

And then I took the bus and train back to Stockholm for wind down.  This is just a brief hint of what the adventure entailed.  I think I will address serendipity, solo travel and lesson’s learned in other posts, and maybe specific adventures.  I took about 1200 pictures, which I still need to review, etc.  One thing I will say is that I seemed to fit in better with Swedes than Americans, in general.  Particularly, their sense of humor…which I’ve been told I don’t have, but I’ve learned I do!  I felt very at home in Sweden.  Perhaps thanks to two Maries, Irene, Anne, Elizabeth, Margareta, a number of bartenders (if you want local ‘how to’ information they are the source) and too many others to name.  Nonetheless, I think some things just remain in your genes…  Happy Quilting!