Conserved for a while…

So I finished my first official attempt at conserving with the Rocking Horse Quilt.  If you haven’t read my prior post, you might want to do that so you can see what this quilt looked like when I began.  This will always be a delicate quilt, but I have hopefully strengthened it enough to be treated nicely for quite a few more years to come.

I removed the ripped and worn binding and the first set of squares surrounding the horse.  I used the old backing to replace these squares.  Here’s the finished quilt top:

I resewed some seams on the original segment of the quilt, but I also used stabilizer on weak or almost non-existent fabric.  I decided to quilt ‘blankie’ by stippling so I could target and, hopefully, strengthen areas that were particularly damaged.  So here were the thread options for the quilting:

I chose the darker brown thread because, surprisingly, it was the least visible.  However, I think any of them would have worked OK.

This doesn’t really show it, but I floated this top.  I don’t usually do that, but it worked out well.  I didn’t want to pull or tack this top any more than necessary.  The owner chose purple for the new backing.  She felt this symbolized its new life.  I think it worked out well and makes the quilt look fresh. 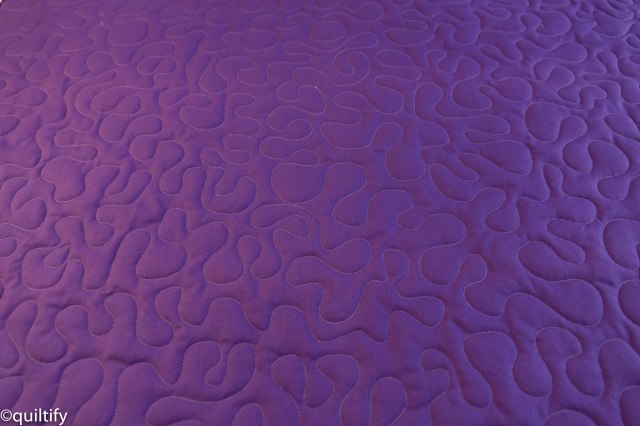 So here’s the stipple.  I had to work around the mane and tail.  Also, sometimes I had to leave the stipple and concentrate on a particularly weak area.  Can you see it on the left side? 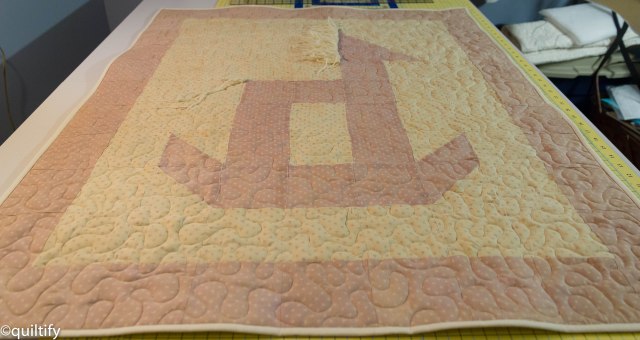 So that’s it for now.  Happy quilting.

2 Responses to Conserved for a while…